SACAU, through the International Fund for Agricultural Development (IFAD) funded Support to Farmers’ Organizations in Africa Program (SFOAP), is providing assistance to farmers in the Bungolava region of Madagascar to get organised into cooperatives. The program which is in its third year is being implemented in collaboration with the Coalition Paysanne de Madagascar (CPM).  SACAU’s Capacity Development Officer, Mr Benito Eliasi visited Madagascar and interacted with some members of the newly established cooperatives in September.

Progress is impressive considering the increased levels of understanding on how cooperatives operate by farmers in the region. “One can observe that farmers have increased their understanding on the basic principles of cooperatives as to where it was three years ago when the project was initiated” said Mr Eliasi.  It is pleasing to note that; farmers in the region have now bought the idea of working in cooperatives and are able to appreciate the changes cooperatives have made in their productivity and profitability as farmers. One farmer mentioned that he was able to produce three tons of maize in one hectare through the support and services he has received from his local cooperative.

Prior to 2014, farmers in this region worked individually and were experiencing difficulties in accessing inputs for maize production as well as better markets for their produce.  Now through working in cooperatives, these services are relatively easily accessible. Farmers are now able to aggregate produce and negotiate for better prices. In addition, farmers are able to participate in the setting of minimum maize prices through the “Regional Maize Producers Platform” of which they are members. The platform is also responsible for allocating markets for different maize buyers. Ms Vonimanitra Maxima, CPM Projects Officer, indicated that for this year; farmers are expected to supply maize to a Mauritian animal feed manufacturing company. This is the first time farmers will be selling their produce to such a big buyer.

One of the female farmers who is the treasurer of TAMBATRA Cooperative told Mr Eliasi that she is now able to comfortably pay school fees for her children as well as buy basics for her household which was difficult before the project.

Through cooperatives, farmers are also learning modern practices of cultivating maize and they are using improved seed varieties. Through collaboration with a number of stakeholders in the region farmers are able to get advice on the production of maize and the project has also linked them to input suppliers.

For a country like Madagascar where the majority of farmers are subsistence, the support to facilitate organising farmers into structures such as cooperatives has the potential of increasing productivity and profitability of farming. It is anticipated that the experiences gained under this  project will be scaled-up in other areas in the country.

Promoting the adoption of Climate-Smart Agriculture in southern Africa 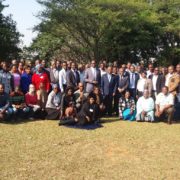 Cotton Producers Hope to Cash in on Cotton